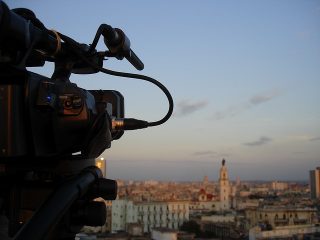 Once you are familiar with documentary modes, the next step is to wrap your head around the traditional conventions used in documentary filmmaking.

As is the case with narrative films, documentaries can serve a variety of purposes for the people who create them. For example, a documentarian might be aiming to entertain, inform or educate an audience. Often, a documentarian will have a clear perspective that they are trying to promote through their film and they design the film accordingly, aiming to persuade the audience while having the audience feel as if the film is an objective representation of an issue, event or person.

Before starting to analyse the film techniques used in a documentary, it is important to keep the filmmaker’s purpose in mind. For example, Invisible Children’s ‘Kony 2012’ documentary – which can also be referred to as an advertisement – had the clear purpose of convincing people from around the world to join and promote Invisible Children’s cause, speaking out against Kony and encouraging governments to take action against him.

There are four main ways in which information can be presented visually in a documentary:

Through compiling historical or archival information, documentarians can often develop a sense of credibility and gravitas. This is most often achieved through the use of:

For example, Invisible Children use quotes from the International Criminal Court – alongside visuals of their documents – in order to enhance the credibility and importance of their argument.

Filming events as they happen

If it is possible to achieve, a documentary is likely to film events as they unfold. This will usually be filmed with a hand-held camera, in part because it’s easiest to manouvere but also in part as it encodes a sense of realism for the audience.

For example, Canberran documentarian Jennifer Peedom’s was filming her documentary ‘Sherpa’ about sherpas helping to assist people to climb Mount Everest when an avalanche hit, killing a number of people. She filmed the responses of a number of people in the aftermath, providing an intimate sense as to what occurred on the mountain that day.

If a documentarian doesn’t have access to footage of the events they are documenting, they can recreate scenes, using actors or animated characters. These sequences are often carefully scripted and storyboarded, just like a fictional film, and if you are analysing such scenes it is worth following the same kind of process that you might when analysing a sequence from a fictional narrative.

For example, the film ‘Touching the Void’ tells the story of the only two men to have reached the summit of Siula Grande in Peru. They didn’t have a film crew with them as they were climbing the mountain, but in order to retell their story, documentarian Kevin MacDonald enlisted actors to recreate the climb and the descent. Watch the clip below, and you will notice that all of the traditional film techniques are worth analysing, from the camera angles to the use of sound and editing.

What is most important to consider when analysing a documentary is whose voices do we hear through the interviews that are presented to us? Like any non-fiction text, the selection and omission of people can be wonderfully instructive in terms of hinting at the purpose of a documentary, as the documentarian has both chosen who to interview and also which parts of the interviews they feel are worth including in their final film. You might ask questions like “How many voices from either side of the issue are presented?” or “Whose voice do we not hear in this documentary?”

It’s also valuable to consider where the interviewees are from. Are they people with a level of credibility behind them, such as an academic or an expert in the field? Are they politicians or celebrities who usually align themselves with one side of politics? Or are they vox pops, where people on the street are interviewed at random, in order for the documentarian to provide a sense that their answers are representative of the answers that all random people would provide?

Other techniques that you should focus on when either creating or analysing a documentary include:

Often, the order in which we hear information can dramatically influence the way that we respond to that information, as audiences can be more inclined to believe and support the first telling of a story that they are exposed to. A documentarian might also choose to juxtapose two contrasting ideas with each other, perhaps to emphasise the difference between them or to show how inaccurate one perspective sounds when it is placed next to another.

For example, the film ‘American Teen’ follows five Year 12 students in America as they complete their final year at school. In one scene, a photo of a student topless is spread around the school via email, and the fast visual rhythm in the sequence – editing that moves quickly from shot to shot – represents the speed at which the photo spread around the small town. This contraction of time culminates in the reveal of a website on which the picture is hosted, implying the great speed between which the initial image was first shared and the time when it was posted online for all to see.

While all sound such as music and sound effects can influence an audience’s response to a documentary, voice-overs can be particularly effective at encoding truth for an audience. That is, the voice-over for a documentary is usually a voice that is respected by the audience – it encourages the audience to believe what is said in a voice-over. Of course, voice-overs are carefully scripted and allow the documentarian to speak directly to the viewer. Sometimes, this is to explain the events of the documentary, but at other times voice-overs may not be so objective and instead offer explanations or opinions on events.

For example, in Michael Moore’s documentary ‘Fahrenheit 911’, Moore is critical of President George W Bush’s response to the attack on the World Trade Center. Moore provides the voice-over throughout the film.

Along with considering who was interviewed for a documentary and who was left out of the film, it’s also important to think about the storylines that weren’t considered or the footage and historical information that weren’t included by the documentarian. Often, a focus on this will enable you to better explain how the filmmaker is attempting to position the audience to respond to the documentary and its content.

For example, the documentary ‘Tower’ is about a day in 1966 when a sniper made his way to the top of the tower at the University of Texas and shot as many people on the campus as he could. The film, though, does not focus on the sniper himself, nor any of his backstory. Instead, the documentary focuses on some of the survivors, witnesses, and heroes and their actions on the day. By avoiding a focus on the sniper himself, the film does not glorify his actions in any way.

‘B Roll’ is the term used for the supplemental footage that is displayed during a documentary or news story, that is usually intercut with the main footage. Often in documentaries, it is shown on the screen while someone is providing an answer to an interview question so that the audience are not simply watching a person talk on screen for too long a time period.