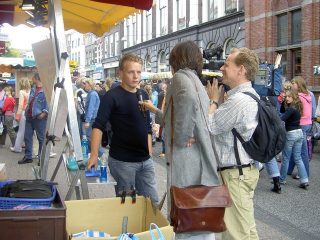 If you are creating a design for a documentary film rather than a traditional, scripted narrative, then it’s time for you to consider all of the ways your production design plan (PDP) will be different from those for a scripted film.

Before you begin, it’s important to remember that many documentarians do not know exactly what their final product will look like prior to beginning the production process. They will have an intention and a target audience, however they may not be aware of the best way of achieving their intention and appealing to their target audience prior to starting the production process. For example, the answers that an interviewee might give to a question may lead you to a new potential interviewee, or to an entirely different line of questioning that becomes a major part of your final product.

As such, your documentary PDP is unlikely to be as precise as PDPs are for other products. This doesn’t mean it still won’t be an incredibly useful document – you just need to be ready for unexpected changes in your plans as you put your product together.

When creating your PDP, it’s worth remembering that while you are assessed on your design, you are also creating it for your future self. The aim of a PDP is for it to assist you while you are on set, filming your documentary.

So, how is a PDP for a documentary different from other film PDPs?

You will need to list your interviewees if you plan to have any in your documentary. Ensure you explain why you are using each interviewee and discuss the credibility they will lend to your product. This will often replace the ‘actors’ section of a PDP, although if you are staging any recreations in your documentary, you might also need an actors section.

Remember, all of your questions should be open-ended so that your interviewees are likely to provide detailed answers. You also should move from asking easier questions first to the harder questions last.

You will only need to have a script in your PDP if you already know what you want to say in sections of your documentary – perhaps an introduction or a scene which needs a voiceover to explain some of the statistics or facts you are presenting. This doesn’t need to be in a traditional screenplay layout. Any other moments in your film that you script can be added to your design during the production process.

Describe each of the pieces of archival footage you plan to use in your documentary. Explain their value to your product and how you will source each piece of footage. As with your storyboard, you want to ensure you have enough footage to use, so it is better to gather more than you are likely to need.

Create a draft running sheet / treatment in which you describe what your audience will see when they watch your documentary. This is the section of your PDP that is most likely to change as you gather all of your footage and rethink the order in which you’d like to present your content, however it is useful for you to have an idea as to how you might edit your documentary together before you begin filming.