To achieve this, the filmmaker needs to consider where to place the camera during a scene. When filming the conversation below, for example, the filmmaker could start filming on the RED side of the scene. They then should remain on that side of the scene for all of their other shots, even if they are shots from different angles and of different frame sizes. If the camera were to cross the line, the audience would be disoriented as the characters would appear to be looking the wrong way. 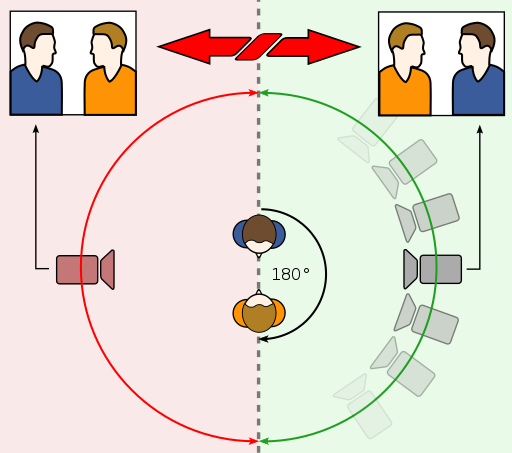 Take the image at the top of this page as an example. In this shot, the woman is looking towards the left of the screen. If in the next shot, you were to have her looking towards the right of screen, it would disorientate the audience who would feel like she was looking the wrong way.

The only way to cross the line without disorientating your audience is by moving the camera over the line during a shot. This old video from Sonnyboo explains it concisely:

Shot Composition For Your Film

Rule of Thirds and Central Framing